I began this version of my website as a blank canvas with a post about hope and the future, and a few months later I’ve still felt no need to trawl my huge archive of materials going back to before the Millennium for a few reasons, the first being that they’re in the past – and that past – although instrumental in shaping where I am today is just that, the past: if I want to write about the past, I will – but I’ll do so with context, and second because I’ve been pruning: not my archive – but my digital life.

I’ve never shied away from trying out different social platforms, from mainstream to the thoroughly obscure I’ve tried a lot of them: some haven’t held my attention, others shuttered themselves, some evolved into services that didn’t interest me and others became a daily part of my life: facebook, twitter, tumblr, flickr, instagram, vsco, soundcloud, mixcloud – they’re all services that I dip in and out of during the week for differing reasons – but what are they really giving me back?

For some it’s a creative outlet, others it’s contact with friends, but by sitting down and actually assessing them I started to realize that far from them all offering something positive, many were injecting negativity into my day, and although I recognized this on some level, it wasn’t until I really gave it some proper thought that it became clear how some were downright toxic.

Now toxicity comes in many formats: and I think it’s important that people realize this: twitter is probably the best example – sure it has some very negative people on it, it has polarized extremists, topic obsessives and people who you can’t always even be sure if they are real people, but it’s not simply the users – twitter is an attention thief.

The app assaults you with notifications throughout the day, forcing the news cycle, political agendas, petty fights and people with opinions you simply shouldn’t care about into you life, and it does so in such a way that you can’t easily fight it, it is monopolizing your hands as you pick up your phone and it is flooding your brain with reward chemicals for interacting with it.

Twitter attempts to package this in it’s marketing as interacting with a ‘global conversation’; but you don’t have conversations in real life like you do on twitter: if you’re having a conversation with someone you’ve chosen to interact with and suddenly 40 other people are jeering and interjecting, that’s not a conversation – that’s a prelude to a bar fight: and unsurprisingly that’s often how even benign conversations on social media end up playing out and you end up doing nothing but defending your rights to hold an opinion in your own social space: that is the very definition of a toxic environment.

So I made some changes

I knew I couldn’t continue living my digital life in such a negative place: the seemingly endless onslaught of notifications and any topic of interest rapidly spiraling toward a shouting match had to stop. So I started from scratch on twitter: this time with no notifications, screening carefully who I follow, and who I allow to follow me as well as maintaining a healthy block list of people and topics that I consider to be negative, and that’s not been easy – the urge to just shout into the void about the world is a strong one, but I know it’s not a healthy one.

Surprisingly also, honing the healthy topic list that I follow and tweet about has been much harder than you’d have thought: beyond politics there are many other areas – gaming and certain sports in particular – that have been all but taken over by an angry breed of obsessives who seem to have nothing else to do but tweet almost psychotically at anyone that disagrees with their world view 18 hours a day. Even for topics that you wouldn’t think could possibly illicit such craziness (such as Disney park fans) there have been a selection of toxic people that I’ve had to weed out and remove from my orbit who simply couldn’t maintain levels of positivity, decency and politeness.

Once I’d started with Twitter, undoubtedly, the worst offender – I found it very easy to become attuned to finding the positive, and it didn’t take long to find myself reaching for the deactivate and delete buttons as I shut down services that weren’t bringing me any level of positive interaction, and even I was surprised myself, to find flickr making that axe. Others while spared the axe have been excessively pruned: instagram in particular took the most aggressive edge of my social media purging, with thousands of accounts unfollowed, aggregators and the previously interesting people who had succumbed to the lure of branding themselves as ‘influencers’ who seem to now to simply recycle the same content endlessly were also sent packing.

And you know what? It’s really made a difference. I now find with notifications turned off that when I’m logging into my new twitter, or my instagram I’m finding a list of notifications that actually mean something to me, they’re comments and long form messages from friends known and new, they’re positive interactions, shared exciting content, useful critiques, and mentorship from people that have something they want to give back.

If you’re anything like me – you’re probably looking at your list of socials and thinking that it’s a mammoth task to prune: and you’re right – no way to sugar coat this – it was: it took me over a month, and I’m still at it, but let me tell you it’s made such a huge difference to the way I look at my digital life – and that newfound positivity has overflowed into my daily life, I’m happier, more optimistic and generally feel less overwhelmed by a world I’d never fully consented to, encroaching on every minute of my private life; so go try it today because this is a change that has to start with you. 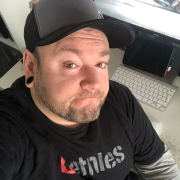